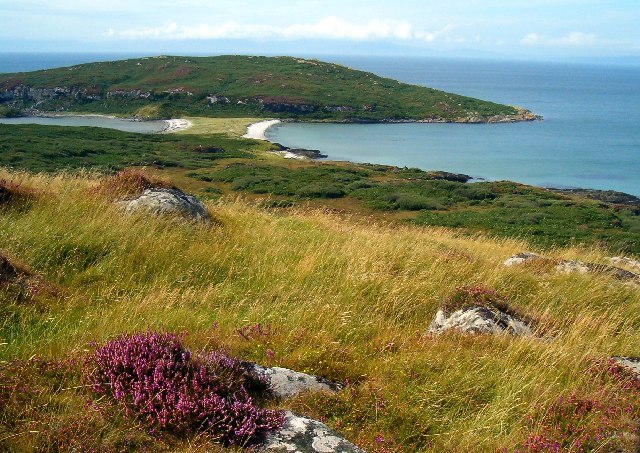 Speculation continues concerning the derivation of the name Gigha (pronounced ‘gee-a’, with a hard ‘g’), but one suggestion is that it comes from old Norse and means ‘Island of God’. To discover for yourself if this is appropriate means taking the ferry from the Kintyre mainland across the Sound of Gigha to the six-mile-long island, which from this angle, looking south, resembles the map of Scotland itself.

Although the sea is audible everywhere you turn on Gigha, those members of the 200-strong population who used to make a living from commercial fishing have had to look to the island’s dozen or so farms, or elsewhere, since the fishing stopped. But the lime-free loam is fertile and the climate comparatively mild. The gardens of Achamore House have some rare plants, including several sub-tropical varieties, and are open to the public in summer. Like other islands nearby, Gigha is MacNeill territory, though they had to fight hard with the Macleans in the 16th century to prove it.

Gigha Island is a hidden gem, contact us now to organise your visit on your Scotland tours.