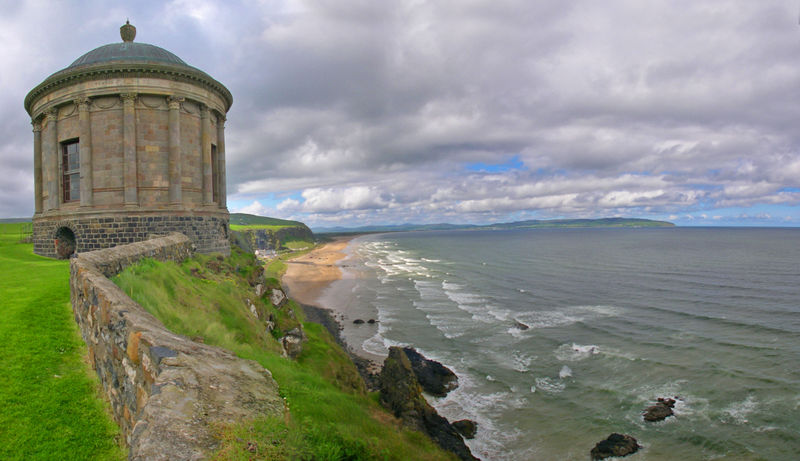 The oddest sight along the Londonderry coast is this small, domed rotunda perched precariously on a windswept headland outside the family resort of Castlerock. The temple was built in 1785 by Fredrick Augustus Herbey, the eccentric Earl of Bristol and Protestant Bishop of Derry, as a memorial to his cousin Mrs Frideswide Mussenden. The design was based on the Temple of Vesta at Tivoli outside Rome.

The walls, made of basalt faced with sandstone, open out at the four points of the compass to three windows and an entrance. Originally designed for use as a library (or, as some stories go, an elaborate boudoir for the bishop’s mistress), the structure is now maintained by the National Trust and remains in excellent condition.

The bishop allowed the local priest to say Mass for his Roman Catholic tenants in the basement. Today, this contains artefacts from the bishop’s former residence, the nearby Downhill Castle, which was gutted by fire and is now little more than an impressive shell.

He surrounding area offers some good glen and cliff walks and there are some magnificent views of Londonderry and Antrim coastline. Below the temple is Downhill Strand, where the bishop sponsored horseback races between his clergy.

Mussenden Temple is a must-see attraction on your tours of Ireland.