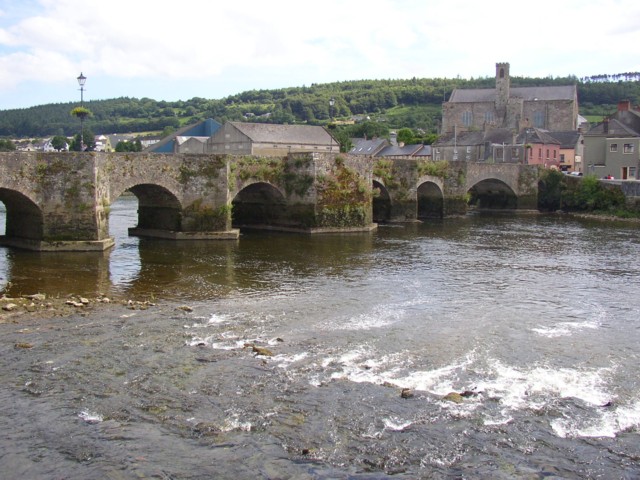 A market town on the River Suir, long associated with the Butler family, later Earls of Ormond. A priory was established at the end of the 12th or beginning of the 13th century for the canons regular of St Augustine. Later the lands formed part of the possessions of Theobald Butler; his grandson Edmund Butler built the first castle in 1309. Edmund Mac Richard Butler rebuilt the castle in the 15th century and the first stone bridge (1447) across the Suir. In the middle of the 16th century Thomas Duff Butler (Black Tom) built Ormond Manor House close by the earlier castle, and this is widely regarded as the finest Elizabethan manor-house in Ireland. Part of the surviving town wall can be seen at Sean Kelly Square (named after a local cycling hero). The Town Clock (1784) was a gift of the Galleway family. In 1670 the Butlers established a woollen industry in the town, which survived until the 19th century. There were strong links with Newfoundland through extensive local emigration to the cod fishery in the 18th and 19th century.

Carrick-on-Suir is a real hidden gem and is worth a visit on your tours of Ireland.