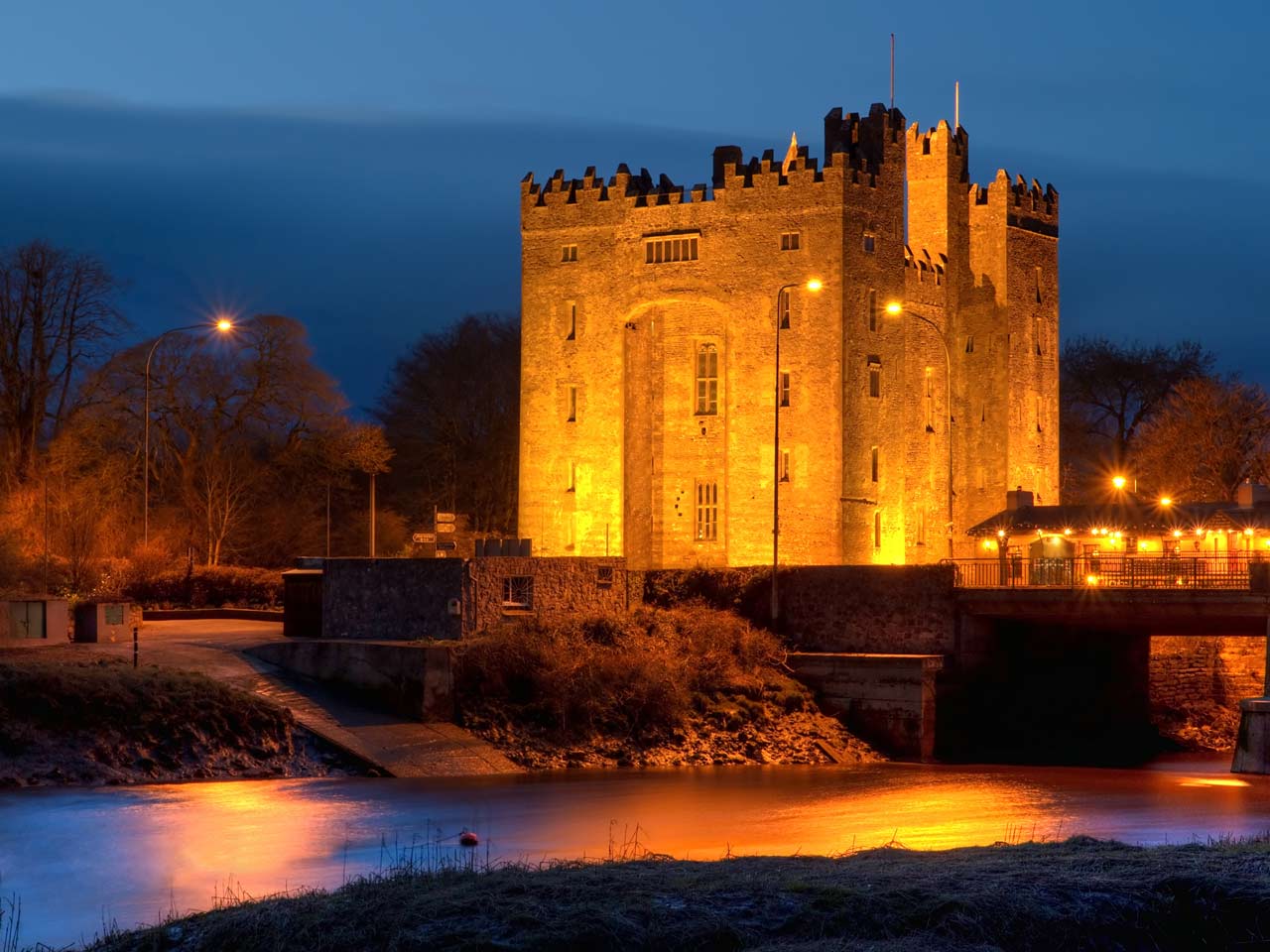 County Clare is a peninsula on the grand scale, cut off on three of its four sides by Lough Derg, the Shannon estuary, and the Atlantic. It is linked with the rest of Munster by only half a dozen bridges, all of which are in the neighbourhood of Limerick and Killaloe. In many ways it seems more a part of Connacht (in ancient times it was) to which it is joined along forty miles of its North side. It has much of the bleakness and poverty of its northern neighbours, and its population is thinly scattered. But in truth it fits no pattern. It is peculiarly formed. Its eastern half, with the Old Red Sandstone of the Slieve Aughty surrounded by flat limestone, is quite like the counties eastward. But a depression goes through its middle, from the Fergus estuary to Galway, dotted in its northern half by turloughs, lakes that fill and drain away into their limestone beds and never allow plants to creep far down their dry banks without welling up again and submerging them. The western half of the country is in two distinct parts again. The Burren, on the north, comprises a unique desert of limestone with floral peculiarities that have botanists rushing to it in spring. To the south, beyond a broad bed of coal, the county tails off in a glum plain of weathered Millstone Grit. Photographs of County Clare tend to be of the coast or specific sights inland.

Cut off as it was, Clare stayed poor. Till well into this century most of the inhabitants had seen neither car nor train. They used the swing-plough, cut meadows with scythes and corn with sickles and spoke Irish universally, as they had done for centuries. The ruthless felling of trees, that changed the western landscape in Cromwellian times and after, made bog where there had been pasture. Atlantic gales have never allowed trees to grow in the western part of the county. Things are going in the right direction now, however a visitor used to farms in Leinster or England or America may marvel at the midget stone-bordered fields; but all the same the fight to save the west is not yet won.

But none of this is apparent as we enter the county. Cromwell’s agents reserved a five-mile strip round the coast for Protestant settlers. In the even they claimed only about one mile’s width and kept to the Shannon estuary. The result is a much richer look on the southern edge of the county; and between Limerick and Ennis – a busy thoroughfare – the estates are richer still. Of recent years the creation of Shannon Airport has shot more wealth into the region.

Nine miles from Limerick on the main Ennis road we reach a spectacular local attraction, Bunratty Castle. Once a centre of the O’Brien Kings of Thomond, it was captured by the Anglo-Norman Thomas de Clare, and the object of constant fighting for two centuries. The building that partly survives was fifteenth century work, and became once again O’Brien property. It was so grand for its time that the Papal Nuncio Rinuccini, arriving to bolster the Catholics in the Civil War of the 1640w, could write, ‘In Italy there is nothing like the palace and grounds of the Lord Thomond’; but the war finished it, the massive keep and little else remaining. Since 1945, when Lord Gort bought it, it has been well restored to its seventeenth century state and, open to the public by day, it is also used in the evenings for old time banquets, based as nearly on seventeenth century conventions as todays travellers would happily countenance. Nearby is the Bunratty Folk Park, a fascinating reconstruction of several traditional kinds of Irish cottage with authentic trimmings. ‘Traditional Irish Nights’ are held here, in which simple food is followed by folk dances, singing and story-telling. A daytime visit is more informative, giving an intriguing glance at a way of life that is only now finally disappearing. R Macalister, one of the greatest Irish archaeologists, wrote that Ireland ‘has rendered to Anthropology he unique, inestimable, indispensable service of carrying a primitive European Precivilisation down into late historic times and there holding it up for observation and instruction’. The Folk Park makes clear what he meant. Mount Ievers, an enchanting and graceful early 18th century mansion like a doll’s house, the height of its three stories accentuated by the fact that each is slightly narrower than the one below. Bricks for one façade (the other is of stone) were shipped from Holland.

County Clare and Southern Galway are truly spectacular and a must see on the Ireland tours.