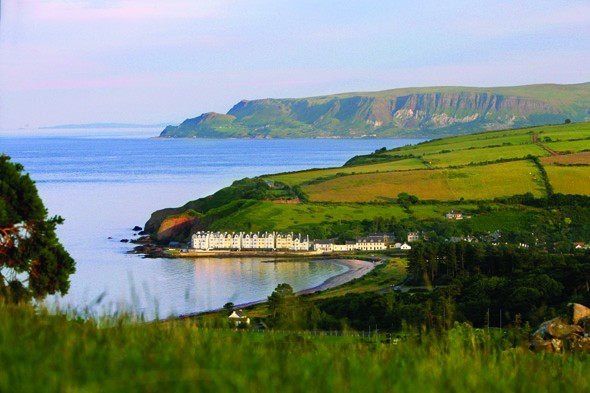 The quiet coastal road which climbs up from the bay and village of Cushendun has its little hair-raising hills and hairpin drops leading to the most surprising landscape in Antrim, or indeed, in Ireland. To come unexpectedly upon lovely Murlough Bay with its high green downlands bouncing and bounding steeply to the sea is to be momentarily at a loss for words. To look up at the great basalt pillars of Fairhead (636 ft.) is at once to hand over the work of description to a properly equipped 19th century traveller: “The precipice, towered majestic over an awful waste of broken columns, presents to the spectator the most stupendous colonnade ever erected by nature, and in comparison with which the proudest monuments of human architecture are but the efforts of pigmy imbecility to the omnipotence of God.”

Cushendun (Cois-abhann-Duine, the mouth of the brown river) is, like its hand woven tweeds, an altogether warmer and more human proposition. The village lies at the entrance to Glendun, one of the famed Nine Glens of Antrim. Here, Shane O’Neill, of whom Lord Deputy Sidney complained to Elizabeth that “This man could burn it if he liked, up to the gates of Dublin and go away unfought”, was murdered in 1567 by the MacDonnells with whom he had sought refuge after defeat. And here Moira O’Neill, the poetess of the Glenns, was born. The Glendun River, given a plentiful supply of water, has a good run of sea-trout and salmon in August, and is easily fished: proved sea-trout flies are Blue and Silver, Professor Peter Ross, and Greenwell. The best of the brown trout fishing is to be found in the upper reaches of the river.

Cushendun is a must see attraction that is worth a stop on your tours of Ireland. Contact us now to organise your visit!