This close packed town, with its old buildings clustered in 13th century streets, retains a medieval feel. Two towns were founded on either side of the River Boyne by the Anglo-Norman Hugh de Lacy. In 1412 they were united by charter to become the largest town in Ireland at the time.

Overlooking Drogheda, and providing excellent views over the town, is the Millmount, a hill that surges up on the South side of the River Boyne, topped by an early 18th century Martello tower. The mound itself, probably of Celtic origin, was built up by the Normans into a huge motte. The Millmount Museum, once an army barracks, now displays gloriously painted banners of the old trade guilds and long obsolete machines and tools used in weaving, brewing, distilling, coopering and metal casting. A prize exhibit is a coracle, a traditional circular fishing vessel, in use locally until 1948. Its willow frame is covered by the leather hide of a prize bull.

Old buildings that reflect Drogheda’s long and sometimes stormy past are scattered though the town. The most prominent, the 1224 Magdalene Tower, is a landmark in the Northern part of town, with a two storey tower rising from a Gothic arch. It was the belfry tower of a once extensive Dominican friary. The 13th century St Lawrence Gate, with two imposing round towers flanking a portcullis entry, formed an advance fortification outside the town walls and is one of the finest of its kind in Ireland. Both are unsafe and closed to the public.

St Peter’s Roman Catholic church, an imposing Gothic Revival building reached by a double flight of steps, houses a shrine containing the embalmed head of St Oliver Plunkett, Archbishop of Armagh, who was disembowelled, beheaded and burnt in London in 1681.

The cemetery of the Protestant St Peter’s Church includes an interesting ‘cadaver’ gravestone which represents the occupants as skeletons, once a common way to remind the living of their final end.

Drogheda is a real hidden gem with a rich history, worth a visit on your tours of Ireland. 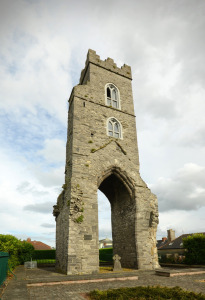