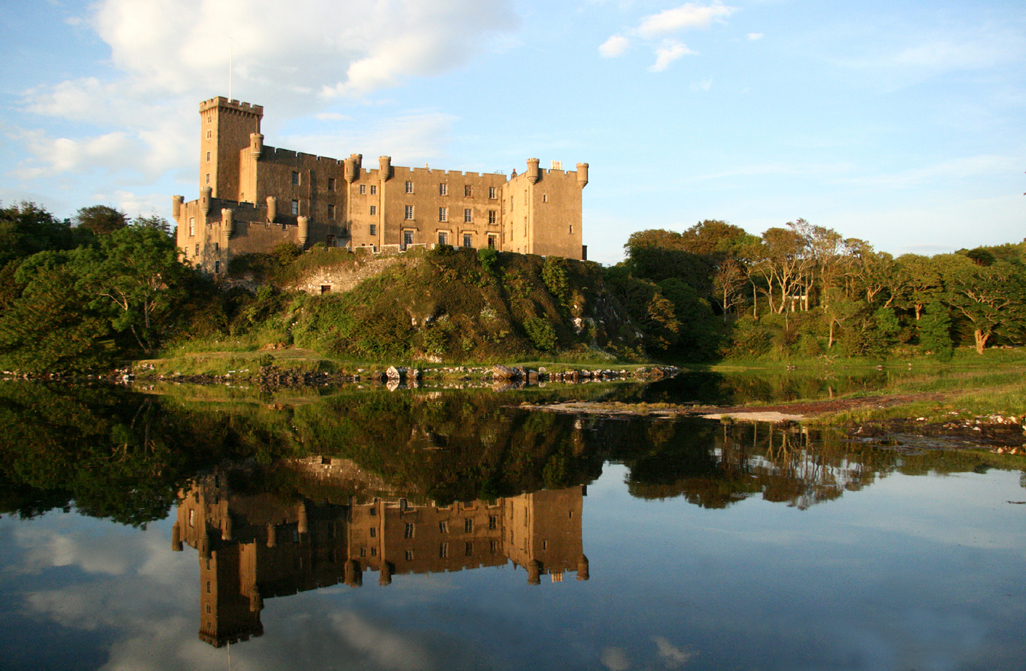 Skye’s most famous historic building is Dunvegan Castle, seat of the chief of Clan MacLeod. It has played host to Samuel Johnston, Sir Walter Scott and, most famously, Flora MacDonald. The oldest parts are the 14th century keep and dungeon, but most of it dates from the 17th to 19th centuries.

In addition to the usual castle stuff – swords, silver, and family portraits – there are some interesting artefacts, most famous being the Fairy Flag, a diaphanous silk banner that dates from sometime between the 4th and 7th centuries. Bonnie Prince Charlie’s waistcoat and a lock of his hair, donated by Flora MacDonald’s granddaughter, share a room with Rory Mor’s Drinking Horn, a beautiful 16th century vessel of Celtic design that could half a gallon of claret. Upholding the family tradition in 1956, John Macleod – the 29th chief, who died in 2007 – downed the contents in one minute and 57 seconds ‘without setting down or falling down’.

From the end of the minor road beyond Dunvegan Castle entrance, an easy walk of 1 mile leads to the Coral Beaches – a pair of blindingly white beaches composed of the bleached exo-skeletons of coralline algae known as maerl.

On the way to Dunvegan from Portree you’ll pass Edinbane Pottery, one of the island’s original craft workshops, established in 1971, where you can watch potters at work creating beautiful and colourful stoneware.

Dunvegan is a must see attraction that is worth seeing on your Scotland tours.