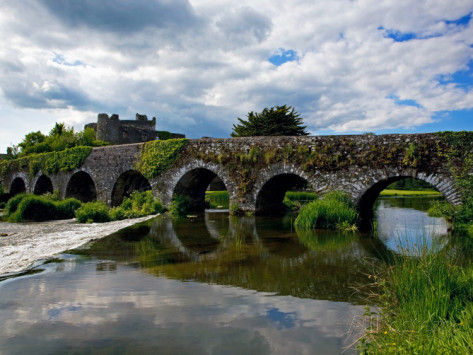 The River Funshion flows through Glanworth where it is spanned by a low stone bridge dating from 1446, the oldest in the country. It has 12 arches and is 150 yards long. Above it are the massive ruins of an ancient castle of the Roches and an old wooden mill.

In prehistoric times Glanworth was the principal settlement of this richly fertile area – a fact reflected in the number of local antiquities. Most notable is Labbacallee Cairn, on Labbacallee Hill, South-East of the village. It is 3500 years old and is one of the biggest and best-preserved wedge tombs (so called because of their shape) in Ireland. Its Irish name means ‘Hag’s Bed’. When the cairn was first excavated, in 1934, a headless female skeleton was found in the inner chamber. The skull was in the outer chamber with some male skeletons. Archaeologists have made similar finds in tombs of about the same age in Brittany.

In the river East of the tomb is a large rock, which, according to legend, was thrown by the Hag at her absconding husband, pinning him to the riverbed. This legend may hint at an ancient matriarchal society – as perhaps do the male skeletons in the tomb.

Glanworth is a hidden gem that is worth a visit on your Ireland tours.