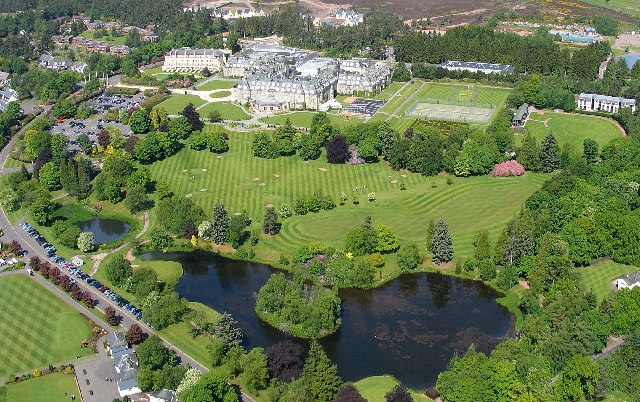 Though the first association with ‘Gleneagles’ is likely to be the golf course and hotel, there is in fact a glen of that name running through the Ochil Hills a little to the south. Moreover, the name has nothing to do with birds, deriving from the Gaelic eaglais, a church. The main courses, the King’s and Queen’s, were laid out in 1918 with the help of the famous golfer, James Braid; the hotel opened 5 years later and two more courses have been added since. If not the hardest in the country to play, they are certainly the most beautiful.


Two miles away in the Strathallan Valley is the village of Blackford, in the same parish as the gold hotel. Here we look southwards on the village and its chequerboard surrounds, and, cupped in the Ochils, the Upper Glen Devon Reservoir. Brewing was once a strong industry here, but the Scottish brewers have fared worse than their English counterparts under the thumb of big business, and consequently real Scotch ale is taking longer to return to its proper place alongside whiskey as part of the Scot’s staple diet.


Gleneagles is a must-see attraction, contact Ireland and Scotland Luxury Tours now to organise your tours of Scotland.