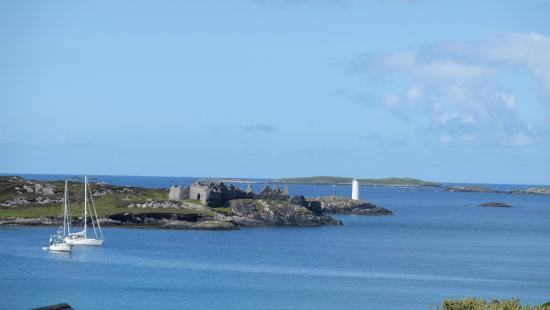 Although only 3 miles long, this little island off the coast of Galway has quite varied landscapes. Across the middle is a broad saddle of pasture, divided by stone walls and dotted with conical haystacks. The eastern side has beaches of fine white sand and a hazy blue view of the mountains across the bay. At the western end, by contrast, rich peat bog rises towards a line of blackened, craggy rocks. Offshore lies the spray-lashed cluster of rocks called the Stags Of Bofin.

About 180 live on Inishbofin, mainly on the southern coast around the large natural harbour. They are connected to the mainland by a regular boat service from Cleggan. The rhythm of life is tranquil now, but the island has a dramatic past. The harbour entrance lies under the eye of the Spanish fort, a lonely ruined fortress on the eastern promontory, assessable only at low tide. It was occupied at one time in the 16th century by a Spanish pirate called Del Bosco, apparently after entering an alliance with the pirate Queen Grace O’Malley. Today its cluster of gables speak more of the castles use as a fortified barracks during Cromwellian times, after 1653, when monks and priests were interned here.

To the east of the island is a little fishing village that lines the deep curve of horseshoe bay. Nearby, in a graveyard grazed by curly horned ewes, is the lichen-covered nave of a 13th century church. It was built on the sight of the 7th century monastery established by St Colman, who arrived here with a group of dissenting monks, having refused to accept the churches decision to abandon celtic church practices in favour of Roman ones.

Inishbofin is a hidden gem and is worth a visit on your Ireland tours.