Island Of Saints and Scholars 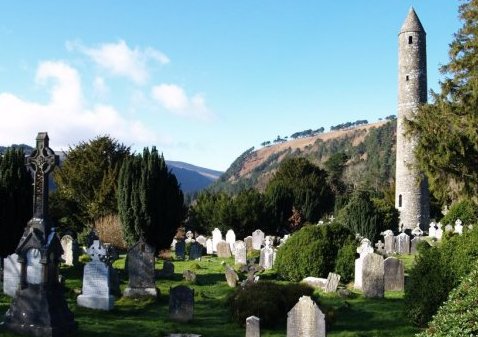 23 Mar Island Of Saints and Scholars

Island Of Saints And Scholars

The coming of Christianity to Ireland in early 5th century was unlike its arrival any other country. Throughout much of the Roman Empire the religion was spread by and edict, imposed upon a conquered people by the occupying Roman administration. But in Ireland Christianity arrived not by   the sword but by persuasive missionaries who ‘Good Word’ to the pagan Gaels and established a vibrant Church.

The Arrival Of St Patrick

Popular legend claims that St Patrick introduced Christianity to Ireland in the middle of the 5th century, but historians believe he was not the first Christian to reach these shores. More likely, lesser-known British missionaries paved the way for his successes. Indeed, there were apparently enough converts in Ireland before Patrick’s arrival to encourage Pope Celestine in AD431 to appoint Ireland’s first bishop, Palladius, as overseer of ‘the Irish believing in Christ’.

Two documents written by St Patrick late in his life roughly outline his career. The son of a Roman official living in western Britain, he was abducted by Irish raiders when he was 16 years old. He remained in Ireland for six years looking after his master’s sheep before escaping. After training as a cleric, probably in Gaul, he returned to Britain, where he dreamed of the Irish people crying ‘We ask thee, boy, come and once more walk among us’.

According to tradition St Patrick returned in 432, and for the next 30 years crisscrossed Ireland making converts and establishing churches. He chose Armagh as the ecclesiastical capital of Ireland, within 3 miles of Eamhain Macha, the great hill-fort once occupied by Kings and Queens of Ulster, and organised the Church along Roman lines.

The Roman model of the Church, with bishops overseeing established dioceses, soon proved unworkable in a rural land that lacked the complex Roman structure of towns and villages. And with the collapse of the Roman Empire and Ireland’s isolation from Europe, the Irish Church was cut off from Rome’s direct influence. Not surprisingly, it soon developed its own character. For example, much to the Pope’s displeasure the Irish insisted on adhering to the traditional dating of Easter instead of following the new method of dating it accepted by Rome in 1457. It was not until 716 that the Irish Church acceded to Rome’s wishes.

Suspect Irish theologians also incurred Rome’s wrath. In 418 Rome excommunicated Pelagius for denying the doctrine of original sin. Ireland’s monks expressed their independence in their appearance, too. Instead of following the European practice of shaving the crown of the head, they shaved their hair at the front of their heads and let it grow long at the back.

In a further move towards independence, the growing number of converts who wanted to dedicate their lives to Christianity established monasteries, in large numbers. Some, driven by a desire to become ‘pilgrims for Christ’, sailed away from Ireland on ‘holy exile’ or left to bring the message of Christianity to foreign lands. Communities were established in Scotland, England, Europe and even in Iceland. One of the most famous of these missionaries was Columbanus, who left Ireland in 590 and founded monasteries in France, Germany and Italy.

The Growth Of The Monasteries

Monasteries in Ireland were at first austere, simple groups of wood or wattle buildings that housed small communities of the faithful. During the 6th and 7th centuries monasticism spread rapidly throughout Ireland as men like St Columba, St Kevin and St Ciaran turned these monasteries into sophisticated centres of worship, learning and artistic enterprise. The gospels were recorded in lavishly illuminated manuscripts such as the Book Of Kells and the Book Of Dimma, now regarded as priceless works of art. Monasteries also fostered the art of metalwork, in reliquaries, book shrines, croziers and devotive plaques Stone carving flourished there too, on High Crosses, as statuary and as decoration on architecture.

By the mid-6th century Christianity largely displaced the ancient pagan rites. Bug it enhanced the native culture too. By introducing the Irish to Latin and the Roman alphabet, which quickly replaced the limited ogham script, Irish monks could preserve their country’s oral traditions. A national written literature was born. The Church, in turn, was influenced by Celtic society. Christian legends were often embellished with details inspired by Celtic myths.

As their fame spread, monasteries such as Glendalough and Clonmacnoise – known as the ‘University of the West’ lured students from England and Europe. The fervent faith and accomplishments of Ireland’s monks and missionaries led it to become known as the ‘Island of Saints and Scholars’. Spared the devastation that ravaged Europe during the barbarian invasions of the Dark Ages, the Irish Church reached a high level of intellectual and cultural achievement. Sadly, this Golden Age was not to last.

The Church Under Attack

In 795 Viking longboats approaching the shore of Ireland marked the end of the islands long isolation. Over the next 200 years the Vikings plundered the land – especially its monasteries – and slaughtered many of the monks. Anglo-Norman invaders followed in the 12th century and Henry VIII’s Protestant Reformation threatened the Irish Church in the 16th century. Some 100 years later Cromwell outlawed Irish priests, and the penal laws of the 16905 forbade Catholic worship.

The Irish Church survived these attacks only to be threatened in the 20th century by the declining interest that afflicts many Churches in the Western world. Today 95 per cent of the Republic of Ireland is Catholic (compared with 23 per cent of Northern Ireland) and the Church still has some on Ireland’s society and culture. But the number at Mass is falling off and few are entering convents or the priesthood. However, people still make regular pilgrimages to shrines such as Lourdes, Fatima and – closer to home – Knock and Croagh Patrick. And rags and mementos are attached to trees around holy wells. So while Ireland may no longer lay claim to the title of ‘Island of Saints and Scholars’, the glories of its legendary founders are still remembered and their blessing invoked.

Ireland’s monasteries are truly spectacular and is a must see attraction on your Ireland tours.