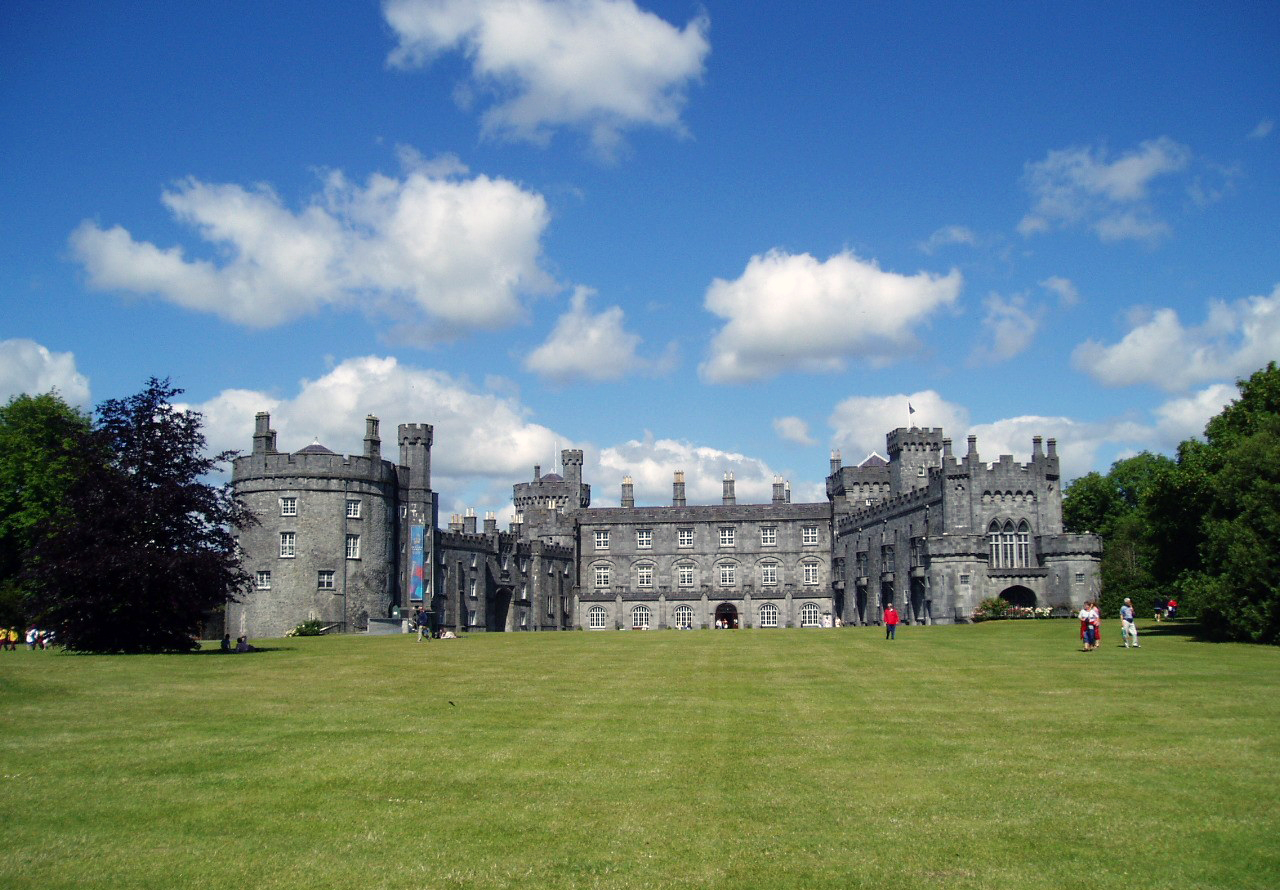 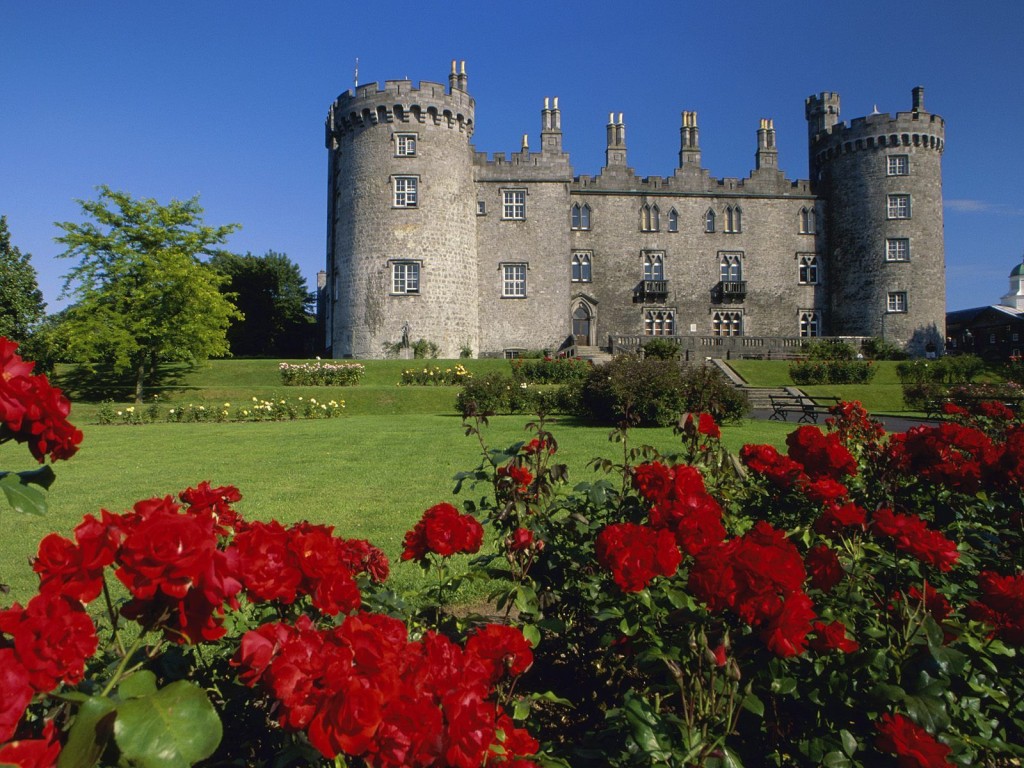 Before the Normans came in the 12th century, Kilkenny’s houses clung to the 6th century monastery of St Canice and the settlement was the capital of Ossory, a sub-Kingdom of Leinster. But the strategic possibilities of the hilltop site where quickly grasped by William Marshal, Earl of Pembroke, who built a castle there in 1192.

At times, Kilkenny vied with Dublin importance, and numerous Irish parliaments were held there. In 1391 the lordship was bought by James Butler, 3rd Earl of Ormonde, one of a family that figured prominently in Ireland’s uneasy history. The castle was the principal seat of the Ormondes from 1391 to 1935, and during that time evolved from medieval castle to Restoration chateau to Victorian country house. It is this last period that most influences the interior. The long picture gallery with painted beams contains portraits by Kneller, Lely, Van Dyke and the pre-Raphaelites. Kilkenny Castle saw its last struggle in the Civil War of 1922, when it was taken over by Anti-Treatyites (who opposed the treaty with Britain dividing Ireland). But they surrendered peaceably after two days.

The castle’s creeper-clad walls rear above the clear waters of the River Nore. Its great drum towers make it look like a mixture of a child’s toy fort and French chateau. It occupies three sides of a square – the forth was destroyed in 1659, opening up a splendid view across parkland to distant hills.

St Canice’s Anglican cathedral, built in 1280 on the site of the original monastery, incorporates some of the remains. The tall tower to one side was used by the monks for refuge. Despite damage by Cromwell’s forces, the cathedral remains one of the finest places of worship still in use in Ireland. It contains black marble monuments to lords, ladies and bishops, and to Edmund Purcell, 16th-century captain of the Ormondes’ notorious gallowglasses, or mercenaries. Near this monument is the 12th- century font and St Kieran’s chair, built into the cathedral walls and still used in the enthronernent of the bishops of Ossory. The bishops’ palace and library stand in the Churchyard. The library was founded in 1679 and contains 3000 works from the 15th, 16th and 17th centuries, as well as the Red Book of Ossory, a 15th-century manuscript which chronicles the lives of early saints.

Among Kilkenny’s other churches is St Mary’s Cathedral, 1849, which has a 200ft tower. It contains a statue of the Virgin by Ciovanni Benzoni (1809-73). An older religious establishment is the Black Abbey, still occupied by Dominicans (the ‘Black Friars’) 700 years after its foundation, and incorporating the church established by William Marshal in 1225. It has a 13th-century alabaster statue of the Holy Trinity and a pre-Reformation statue – much knocked about – of St Dominic, carved from Irish oak. By the abbey is Black Freren Gate, the only medieval town gate left, named after the Black Friars. Among Kilkenny`s secular buildings, the most important include Rothe House, built by the merchant John Rothe in 1594 (restored 1966). The expansion of his family of 12 children meant he had to build two further houses around cobbled courtyards. The three are now linked and contain the museum and library of Kilkenny Archaeological Society. Opposite is the county courthouse, built in 1794 over a grey, bar windowed building that in 1220 was Grace’s Castle and then later a prison.

Nearby is a Tudor almshouse, a rarity in Ireland. It was built by the lawyer Sir Richard Shee in 1584 and now houses the Tourist Information Centre. Upstairs is the City Scope, a model son et lumiere display of Kilkenny in its 17th-century heyday – In the heart of the town, in the Tholsel, once a tollhouse, is the City Hall. The building has an octagonal clock and dates from 1761. It contains municipal archives from 1230 and the city’s sword, 1609, and mace, 1677. The Butler Slip is one of the few of Kilkenny’s ancient alleys to remain. Close by was the Hole-in-the-Wall Inn, patronised by young bloods who got ‘dead drunk for a penny or tipsy for nothing at all’.

One of Kilkenny’s most notorious characters was the beautiful moneylender Dame Alice Kyteler. Born in 1284, she lived in Kyteler’s Inn, which still stands in one of the town’s alleys. In 1324 she was charged by Bishop Ledrede with witchcraft and consorting with demons. For good measure, he also accused her of poisoning her four husbands, Who died in suspiciously swift succession. Dame Alice was sentenced to die at the stake – but she escaped and fled to Scotland, leaving her unfortunate maid, Petronilla, to burn in her stead outside the Tholsel. Legend has it that the poor girl haunts the inn and the surrounding streets to this day.

Kilkenny is a real must see attraction on your Ireland tours.