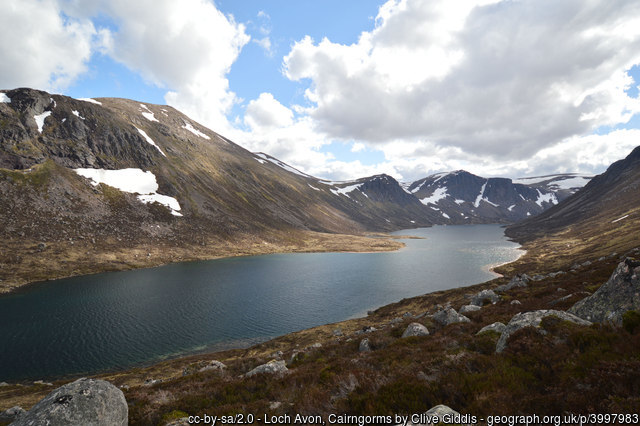 The Cairngorms are not the preserve of skilled and well-equipped mountaineers; apart from the ski routes with their merciful chairlifts, they contain many paths for the adventurous walker. To reach Loch Avon, a narrow trench of water bulldozed into shape by an Ice Age glacier between Cairn Gorm  and Ben Macdui, you have to be prepared to trudge all the way up Glen Derry, skirting the flanks of some of Britain’s highest mountains (six of the Cairngorm peaks are above 4000 feet). Here we look south-west at Ben Macdui’s ankles, and the stream trickling into the loch from its source a mile or so away. Passing by in 1861, Queen Victoria could not help noticing the ‘the snow…has such fine effect.’

Loch Avon is a hidden gem and if you are happy with the hike it is a true hidden gem that must be seen.