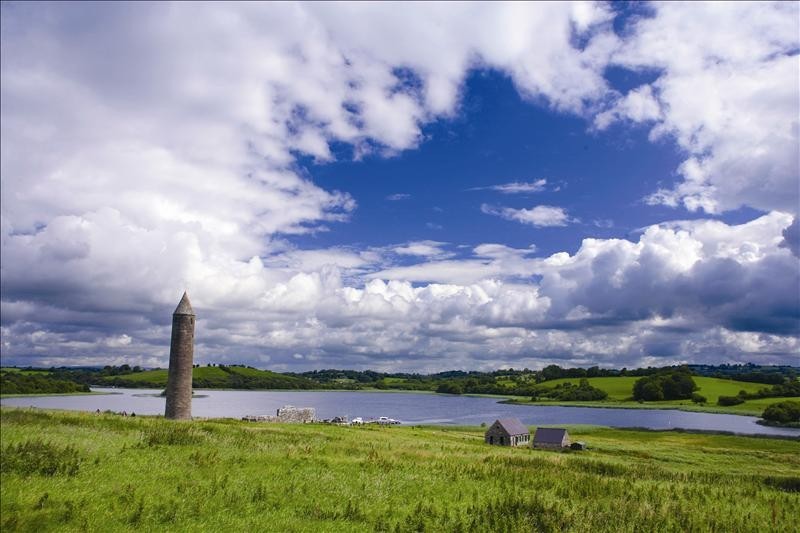 Northern Ireland has some of the most enchanting landscapes on the whole island – untouched by the strife that keeps the province in the news. From the rugged Atlantic-torn cliffs of Antrim in the north to the warm, wooded shores of Carlingford Lough in the south, this region offers all the variety of historical charm and fine scenery that can be found on the other side of the border.

In the ancient province of Ulster, Celtic kings and a queen ruled from Eamhain Macha, west of Armagh. Their palace, said to have been protected by the legendary Red Branch Knights, is now just a mound. Ulster is also where tradition has it that St Patrick first landed as a missionary, beside Strangford Lough, in about AD 432. He built his first church nearby, at Saul, and founded a monastery at Armagh, which became the ecclesiastical centre of Ireland. St Patrick is said to be buried at Downpatrick Cathedral.

After St Patrick, Christianity spread fast. Churches and monasteries sprang up throughout the north – only to become easy prey for generations of Vikings, who were hit-and-run raiders. The invaders who followed them, the Normans, came to stay. The Normans built castles like those at Carrickfergus and Dundrum to control the land they seized, But they never gained complete control, and for 400 years Norman barons and Irish Chieftains ruled their fiefdoms – more or less under, the English Crown.

Then Queen Elizabeth decided to impose more direct rule from England. In the ensuing war Ulster put up strong resistance to her armies, but lost. Rebel lands were confiscated and from 1603 onwards were heavily planted with Scottish and English settlers. The result is that today the majority of Northern Ireland’s population is Protestant. Under the Anglo-Irish Treaty of 1921, ulster was divided. Six counties – Antrim, Down, Armagh, Tyrone, Fermanagh, and Londonderry – formed Northern Ireland, and three – Donegal, Cavan and Monaghan – were incorporated in what later became the Republic of Ireland.

But Northern Ireland has its far more peaceful and beautiful side, like the Mourne Mountains, with their famous Silent Valley, and sloped rolling down to the pretty beaches and fishing villages of the Down coastline. To the North, the glens of County Antrim run down to a coastline of exceptional beauty. And near the Northern tip is one of the great natural wonders of the world – The Giant’s Causeway – where cooling lava has solidified into a series of stepped polygonal columns of such geometrical precision that people assumed they must have been placed there by a giant. Fermanagh is the south-west, is Northern Ireland’s Lakeland, where the sprawling path of the River Erne swells into Lower and Upper Lough Erne. Several of the islands in the loughs contain early Christian relics, including the monastery and Round Tower of Devenish Island, and a set of mysterious weather-beaten statues on White Island.

North of the lake county are the sparsely populated moorlands and forests of County Tyrone, bordered to their North by the softly contoured Sperrin Mountains, and County Derry. Londonderry stands at the head of the broad estuary of the River Foyle. The city’s great walls still carry the cannon that helped them withstand the siege of 1689.

Belfast, Northern Ireland’s largest ciy with a population of just over 360,000, was built with19th century industrial money, giving it a marked Victorian character. It is beautifully set at the head of a sea lough ringed by hills. A few miles east of the city is Strangford Lough, a virtually landlocked arm of the sea and one of the richest maritime habitats in Europe; it is also the gathering place for thousands of migratory birds including the rare pale-bellied brent geese. Lough Neagh, west of the city, is the largest lake in the British Isles. Five of Northern Ireland‘s six counties – all but Fermanagh – meet around the lake. Across the whole region the old Anglo-lrish ‘big houses’ have survived far better than in the Republic, where many were destroyed in the Civil War of 1922-3. A number are open to the public, including Castle Coole and Florence Court in County Fermanagh, and in County Down, Castle Ward near Portaferry, and Mount Stewart, near Newtownards. Mount Stewart also has one of the finest gardens in the British Isles, rivalled by nearby Rowallane. Indeed, the whole province is richly endowed with flourishing gardens that thrive in its mild climate.

Northern Ireland is full of spectacular scenery and is somewhere you must see on your tours of Ireland.