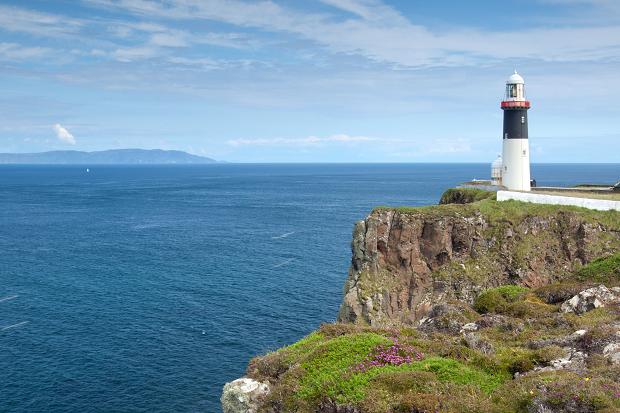 A short boat trip away from Ballycastle harbour is Rathlin Island, said in legend to have been dropped into the sea by the mother of the legendary hero Finn MacCool, on her way to Scotland. The habitation of this 6 mile long, L-shaped island is ancient – flint implements and a porcellanite factory that may be 6000 years old have been discovered on the West side.

The Kebble Nature Reserve at Bull Point, on the West of the island, has tens of thousands of birds, up to 175 species nesting in the 350ft high cliffs and sea stacks. Puffins, kittiwakes, razorbills, guillemots and numerous other seabirds perch on the ledges near an ‘upside-down’ lighthouse, so called because it has its light at the bottom rather than the top.

To the East of the island, near another lighthouse, is the cave where the Scottish leader Robert Bruce hid after being defeated by the English at Perth in 1306. Watching a spider in the cave spinning its web taught him the virtue of patience, and he later returned to Scotland to become victorious at the Battle of Bannockburn.

Rathlin was allegedly the first place in Ireland to be raided by the Vikings in the 18th century. Legend recalls that the King of Norway, Nabghoden, sent a delegation to Ireland to find him a wife. On Rathlin they found Taisie Taobhgheal, daughter of Donn, the King of the Island, who was already betrothed to Cobhghal. They tried to take her away by force as the wedding celebrations were underway, and in the ensuing battle the Norwegian king was killed. Land on the mainland was given to the newlyweds to build a palace in the area now known as Glentaisie.

In 1551, Sorley Boy MacDonnell captured Rathlin, but he was ousted from it by English forces in 1575, and they massacred the islanders. In 1642, the Campbells killed many of the next wave of Islanders by brutally throwing them to their deaths over the cliffs.

A monastic site was established by St Comgall in the 6th century at Church Quarter, near the harbour, where two churches, one Catholic, one Anglican, now stand. An amenity centre was opened on the island in 1990, built with money donated by the millionaire businessman Richard Branson who landed in his balloon near the island and was saved by the island’s rescue service.

Rathlin Island is a real must see on your Ireland tours.