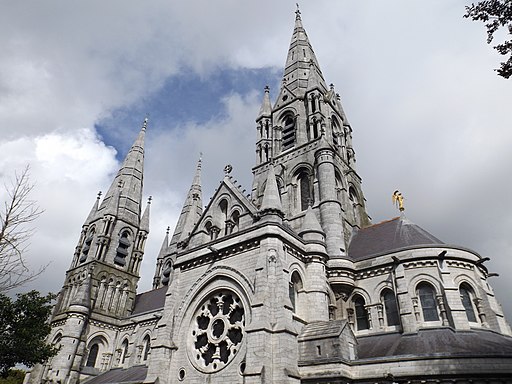 Cork is the chief city of Munster and is said to have been founded in the sixth or seventh century by Saint Finbarr.

He established a monastic settlement on the south side of the River Lee containing over 700 priests, monks, and students.

Danes and Anglo-Normans in turn ravaged the place and established trading centres there.

I the seventeenth century, tradesmen from half the ports in Europe came to Cork for salt fish, salt butter, and salt meat.

Saint Finbarrs Cathedral, the most notable building in Cork, is comparatively modern.

The original church, on whose site it stands, was destroyed in the Williamite siege of 1690.

Only a cannon ball remains, hanging in the transept of the present church, as witness.

The River Lee is 55 miles long from its source to its mouth.

It is one of the most delightful rivers in Ireland with its winding course dotted with the ruins of castles, abbeys, and monasteries.

On a pilgrim island are the ruined oratory and chapel of Finbarr, who lived there prior to founding the Cathedral in Cork.

At Ireland and Scotland Luxury Tours we usually base our clients in the nearby village of Kinsale to make it easier to visit Cork.