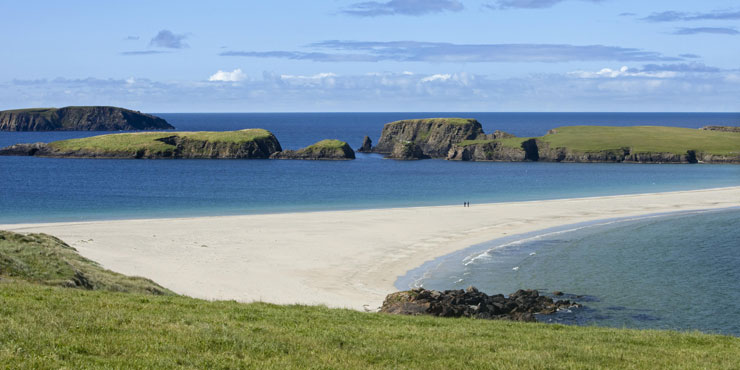 The rugged and remote Shetland Islands – a collection of mighty, wind-ravaged clumps of brown and green earth rising from the frigid waters of the North Sea – are Scotland’s northerly outpost and feel miles away from anywhere. Mainland is the biggest Island with over 100 windswept and virtually treeless islands making up the archipelago.

Far more desolate and cut off than Orkney, the light here is even more changeable than on mainland Scotland. Different parts of the Island are variously illuminated at any given hour – the window for that perfect photo can be short. The setting is still uniquely Scottish, though, with deep, naked glens flanked by steep hills, twinkling, sky-blue lochs and, of course, sheep with no comprehension of the ‘right of way’ on roads.

The Islands’ far-flung location is belied by the activity and charisma of the capital, Lerwick, causing you to forget the 60 plus oceanic miles between you and the mainland. But once you’re outside the humming capital, the isolation sweeps you off your feet – frequent thundering gales thrash across the raw landscape and Mother Nature whips up the wild Atlantic into white-cap frenzies that smash into imposing coastal cliffs.

The capital of the Shetlands stubbornly defies its seclusion from the rest of Scotland with a vitality that’s surprising for such an isolated town. Although the Shetland Islands have been occupied for several thousand, Lerwick was only established in the 17th century. In the late 19th century it was the largest herring town in Northern Europe. Today, it’s the main port of entry into the Shetlands and a transit point to the North Sea.

What to see on the Shetland Islands

Above the town, there are excellent views from the battlements of Fort Charlotte, built in 1665 to protect the harbour from the Dutch navy.

The Shetland Museum is an impressive recollection of 5000 years’ worth of culture and people, and their interaction with this ancient landscape. There’s a smorgasbord of Shetland treasures, including hanging boats, and you can even pop into the underground home of a ‘trowie knowe’ (a Shetland mythical creature).

There’s a lot of memorabilia and an authentic feel to the Bod of Gremista, a restored 18th century fishing booth located 1 mile North of the centre; the highlight is the chatty old salt who shows visitors around.

The fortified site of Clickimin Broch, just under a mile Southwest of the town centre, was occupied from the 7th century BC to the 6th century AD. It’s impressively large and its setting on a small loch gives it a feeling of being removed from the present day – unusual given the surrounding urban encroachment.

The Shetland Islands are truly spectacular and a must see on your tours of Scotland.