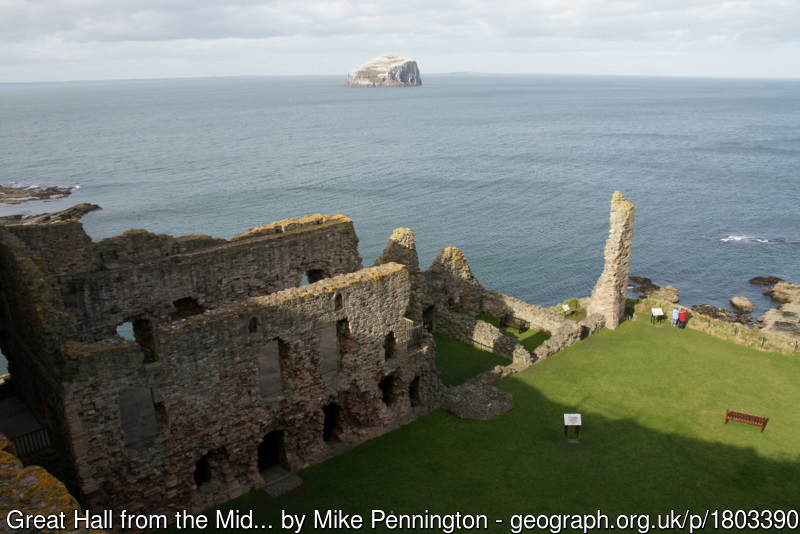 Both road and rail north to Edinburgh from England run through country like this after crossing the border at Berwick. With sea and cliffs on one side and portions of sweet land on the other, no more beguiling introduction could be found. Then comes the sight of a Scottish castle. Tantallon has survived six centuries of military might, not to mention east coast weather, better than most – giving rise to the expression to ‘ding doon Tantallon Castle’, meaning that such a destructive feat is tantamount to impossibility.

The first Scottish castles, usually made of wood, were built by the Norman ruling class during the 11th & 12th centuries. These were followed by far more formidable houses, of which this is one of the best examples. Like others (for example, Mingary and Loch Leven) it is protected by a curtain wall, a non-load-bearing structure built to defy the sea and severe weather, which in this case is 12ft thick in places. As for military security, Tantallon has a moat and towers on one side, and hundred-foot cliffs down to the sea on the others. It was a Douglas stronghold until it was conquered and dismantled during the Cromwellian occupation in 1651; but its rosy red sandstone, quarried locally, has remained in place since then.

Tantallon is a hidden gem and is worth a visit on your tours of Scotland, contact us now at Ireland and Scotland Luxury Tours to organise your trip.