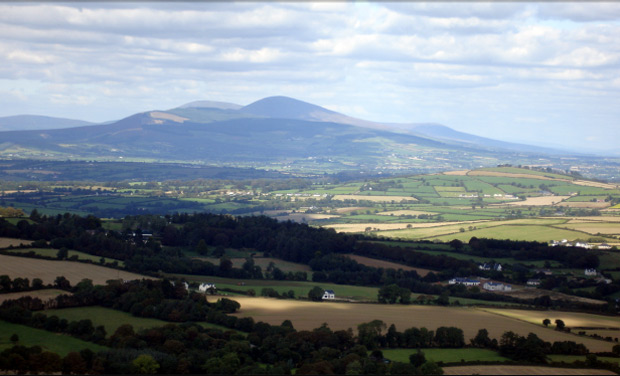 The granite ridge that forms the lovely Wicklow and Blackstairs Mountains across the south-east corner of Ireland has given this region a distinctive character and history. For centuries it formed a barrier against invaders from the west. As a result, the inhabitants who settled on the fertile land between the mountains and the sea often had more to do with Wales and England, or points still farther east, than with the rest of Ireland. The coastal towns, Wexford, Wicklow and Arklow, and Waterford city, were Viking settlements. Their names reflect their Viking origin – Weissfjord, ‘the ford of the goddess Weiss’; Wyking Lo, ‘Viking meadow’.

Counties Kilkenny, Carlow, Wexford and Wicklow all form the southern part of the province of Leinster, which also stretched northwards across the midlands. County Waterford has variously been part of Leinster and Munster, settling finally for the latter. When the King of Leinster, Dermot Macmurrough, invited the Anglo-Normans to help him in his struggle against the High King of Ireland, their armies under Strongbow came through Waterford, and quickly established Anglo-Norman supremacy along this strategic coast. But the hinterland remained in the hands of Celtic chiefs – clans such as the O’Tooles and the O’Byrnes – who pestered the Anglo-Normans from their retreats in the Wicklow Mountains.

The dominant family throughout this period was the Butlers, Earls of Ormonde, who based themselves in the massive castle of Kilkenny and ruled from there for 550 years. Their great rivals were the FitzGeralds, Earls of Desmond, from neighbouring Munster, but they found a common enemy in Cromwell. In 1642, the ruling Irish families formed an alliance called the Confederation of Kilkenny to fight against the rule of Protestant England during the ‘Great Rebellion’ of the 1640s. But they paid dearly for their stand. The result was a new order which saw the replacement of the old Anglo-Norman and Irish families by Protestant landlords ‘planted’ by the English Crown.

But the south-east did not forswear its traditions of dissidence. It was the focus of the 1798 rebellion of United Irishmen under Father John Murphy, against the British administration, and also produced Charles Stewart Parnell, Member of Parliament and a key figure in the land reform movement of the late 19th century. He lived at Avondale, County Wicklow, where his home is now a museum.

This is the sunniest corner of Ireland. The coast is fringed with long ribbons of silver sand and fine beaches, such as Jack’s Hole and Brittas Bay.  The hills are a delightful mixture of wooded glens and open, undulating uplands. Roads wind through pretty valleys and bold tracts of bog to the ‘Gaps’, the old passes to the interior. The wild beauty of Glendalough provides the setting for one of Ireland’s most endearing early Christian monuments, the tiny stone-roofed chapel called Kevin’s Kitchen, and its accompanying Round Tower. The contrast between tamed and unfettered nature is beautifully exploited at Powerscourt, where the formal gardens have views across a lake to the weathered pinnacle called the Great Sugar Loaf. Other gardens worth visiting are at Mount Usher.

There are two notable houses open to the public within striking distance of Dublin: Kilruddery House, a rare and elegant survivor from the 17th century; and Russborough House, a splendid Palladian house designed in the mid-18th century by Richard Cassel, which now contains the Beit art collection.

The landscape opens out towards the south in the hinterland to the towns of Wexford and Waterford. County Waterford is in some ways the south-east writ small, with a pretty coastline rising through an undulating landscape of pasture to the Comeragh, Monavullagh and Knockmealdown Mountains. It was settled by a Celtic tribe called the Deisi, and the county is still widely referred to as ‘The Decies’. To the north, Kilkenny clips the corner of the limestone country which fills the central regions of Ireland. Visitors to the Dunmore Caves there can follow paths which worms their way through an architecture of fantastical limestone pillars.

The south-eastern coastline, chiselled by estuaries of the Rivers Slaney, Barrow, Suir and Blackwater, breaks up into beaches and rocky peninsulas, joined by paths that lead over grassy headlands dotted with sea pinks and sea campion. The broad expanses of wetlands round Dungarvan and Tramore are visiting stops for migratory waders and for wintering brent geese. The Slobs, reclaimed land near Wexford town, is a temporary stopover for the largest concentration of migrating Greenland white-fronted geese in the world.

The River Barrow is navigable, and cruisers from the Grand Canal in the midlands can drop down through some fine hill scenery as far south as St Mullin’s. The Barrow is also fished for its salmon and trout, while the Blackwater and Slaney are noted salmon rivers. For golfers there is a major seaside links at Rosslare, and a further five agreeable parkland courses making up the so called South-East Six. Cultural events are offered too: Waterford hosts a celebrated Light Opera Festival; Kilkenny has an arts week in August; and Wexford has an Opera Festival respected for its high-quality productions.

The Leinster Ridge is truly spectacular with coastline’s that are a must see on your tours of Ireland.