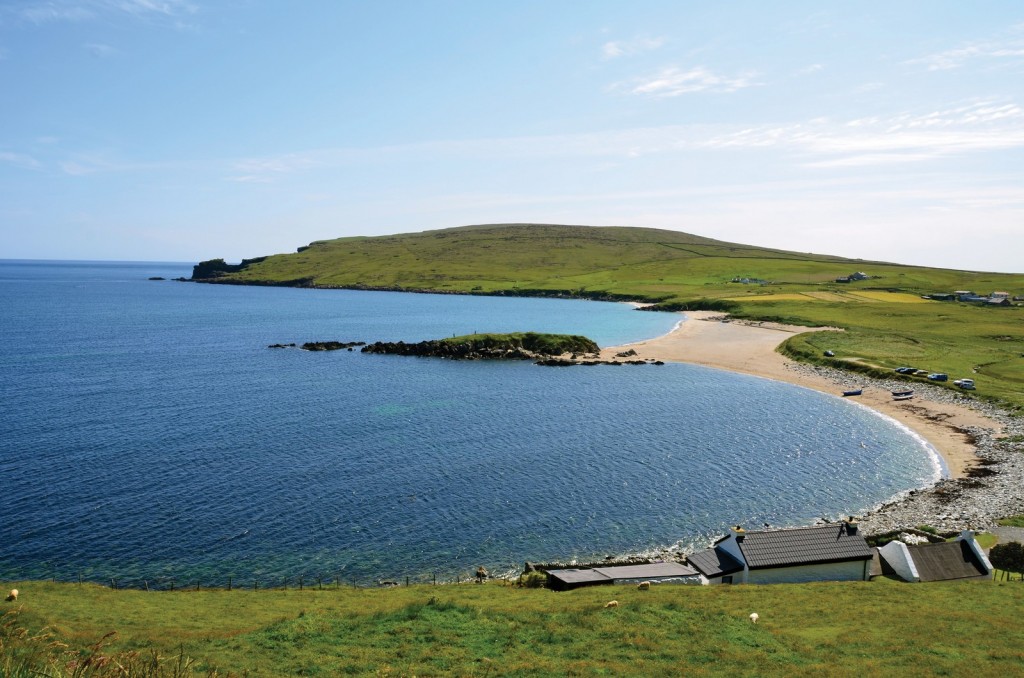 Unst is a lot smaller but prettier than Yell with bare, velvety-smooth hills and clusters of settlements that cling to their waterside locations, fiercely resisting the buffeting winds, It also feels less isolated and has more of a community. With an area of 45 sq miles it’s Scotland’s northernmost inhabited island. There’s a wide variety of vegetation – over 400 different plant species. Some of the most unusual examples can be seen at the 30 hectare Keen of Hamar National Nature Reserve northeast of Baltasound.

In the northwest is the wonderfully   and windy National Nature Reserve of Hermaness. Here you can sit on the high cliffs, commune with the thousands of sea birds and Shetland’s largest colony of puffins (best seen in May and June), and gaze across the seat towards the Arctic Circle. The more energetic should take on the superb cliff-top walk along the west coast.

The Hermaness Visitor, near the reserve’s entrance, has an interactive sea-bird exhibit and provides information on the island’s wildlife.

Robert Louis Stevenson wrote Treasure Island while living on Unst and the map in the novel is reputedly based on the islands Stevenson’s uncle built the lighthouse ox; Muckle Flugga, one of the group of rocks off Hermaness; another of the rocks is Out Stack, Scotland’s most northerly point.

Unst Heritage Centre houses a modern museum with a history of the Shetland pony, and a nostalgic look at the past. There’s a re-creation of a croft house complete with box bed and, for weather-obsessed Brits, a summary of the last 170 of weather in the Shetlands. Unst Boat Haven housed in a large shed and is every boaty’s delight, with rowing and sailing boats photographs of more boats, and maritime artefacts.

For a swig of the most northerly   Britain, drop into Valhalla Brewery.

Fetlar is the smallest (five miles by two miles) but most fertile of the North Isles. Much of the island is designated an SSSI. There`s great bird-watching here, and the 705 hectares of grassy moorland around Vord Hill (l59m) in the north form the Fetlar RSPB Reserve. Common and grey seals can also be seen on the shores. The reserve is closed during the breeding season from May to August; contact the warden at Baelans.

Scenic walking is possible on much of the island, especially around the bay near Tresta, at Urie and Gruting in the north, and Funzie in the east.

There’s no petrol on Fetlar, but there’s a shop and a post office in Houbie, the main village. The excellent Fetlar Interpretive Centre, near the post office, has photos, audio recordings and videos on the island and its history. Regular ferries from Oddsta in the island’s northwest connect with Gutcher on Yell and Belmont on Unst.

The Shetland Islands are a must see attraction on your tours of Scotland.