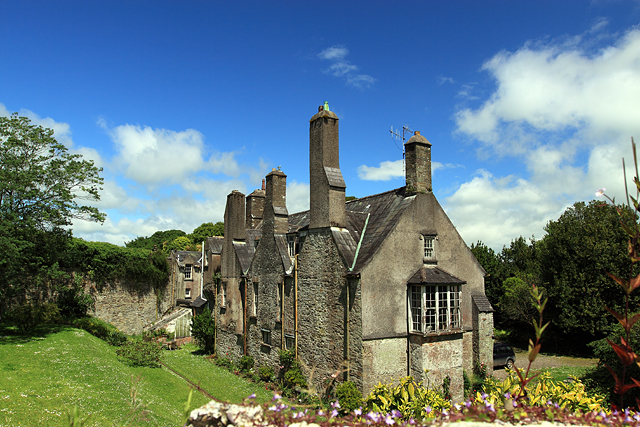 One a strongly fortified harbour town, Youghal (pronounced ‘yawl’) is now a popular seaside resort with wide sandy beaches. Its Irish name means ‘yew wood’, from the forests that once covered the hinterland.

Youghal is strategically placed at the mouth of the River Blackwater. It may have been occupied briefly by Norse pirate-traders in the 9th century, and after them Anglo-Normans in the 13th century. It was first properly fortified by Edward I in 1275. Because of the wealth of architecture these medieval settlers left behind, Youghal has been classified as a ‘Theme Town’.

The town’s most famous landmark is the unusual Georgian clock tower that spans the main street. It was built in 1777 from mellow red sandstone. Four storeys high, it connects two buildings which together formed the prison. Steps leading from the clock tower climb the steep hill to the top of the town, where the walls and turrets of the medieval defences can still be seen. Among the best preserved town walls in Ireland, they probably date from the 15th century, and were refortified during the Civil War in 1642.

Nearby is St Mary’s, the Church of Ireland parish church, a large 13th century building and one of the few medieval Irish churches still in regular use. It has an unusual feature – holes in the chancel walls, behind which are pottery jars, placed there to improve the acoustics. Among its monuments is the imposing 1619 tomb of Sir Richard Boyle, 1st Earl of Cork, and his wife.

In Viking times it is said that the forerunner of Youghal lighthouse was maintained by nuns from the nearby St Anne’s Convent. There as an underground passage from the convent to the beacon. Every night 12 nuns took it in turn to keep alight the beacon that guided the longships into the harbour.

Sir Walter Raleigh, who brought both the potato and tobacco to Europe, was Youghal’s mayor in 1588-9. He lived at Myrtle Grove, an Elizabethan mansion, and is said to have grown Ireland’s first potatoes on his extensive estates. Apparently when Raleigh first sampled a potato plant he ate the berry, and finding it inedible told his gardener to dig the plant out. The gardener dug it up and discovered he tuber, which he then cooked and ate with pleasure. Thereafter the potato became Ireland’s traditional staple food.

A local story tells how one day Sir Walter was sitting under a tree in his Myrtle Grove garden quietly smoking a pipe. A maid servant, seeing the clouds of smoke billowing round his head, thought he was on fire and threw a bucket of water over him. She was roundly cursed by Raleigh, who had been enjoying his first smoke in Europe.

Youghal is a hidden gem that has a rich history and is worth a visit on your tours of Ireland.