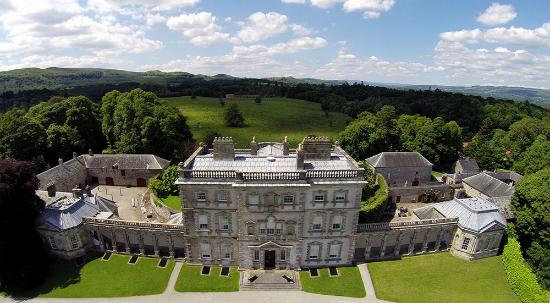 Florence Court is one of the most important neo-classical 18th century houses in the country. It was named after Florence Bourchier-Wrey, who married John Cole in 1707. The property was inherited by their son, who was elevated to the Irish peerage as Baron Mountflorence in 1760. The present mansion dates from 1751-64, with wings added some years later by Davis Ducart. The finely proportioned central block is flanked by arcades with end pavilions and the interior contains a set of state rooms prepared for a visit of George IV in 1821. These are decorated with Rococo plasterwork by John West. The house has been opened to the public since its restoration after a fire in 1955, when the ceiling of the sitting room collapsed. The fireplace in that room is exceptionally fine. The library, to the right of the entrance, contains prints of local views, and a portrait of the 2nd Earl of Enniskillen, by Lawrence. The collection of Meissen ware, and the Venetian Room (named after its Venetian window) on the first floor (ceiling restored) are of interest. The extensive gardens (700 acres) contain numerous fine trees including the parent tree from which the Florence Court Yew has been propagated.

To the west is the Cladagh Glen, with a footpath ascending to the Marble Arch Caves, where the stream flows out from an underground channel, beneath a detached archway.

Florence Court is a must see on your Ireland tours.