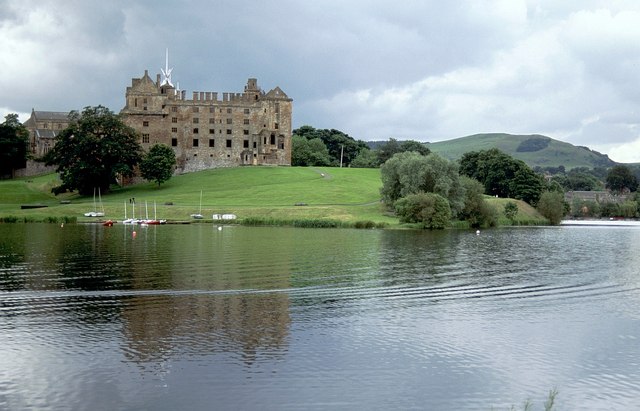 One of Scotland’s oldest royal burghs, Linlithgow was a common stopover for important personages in the Middle Ages. Today the ruins of the fortified Linlithgow Palace are exceptionally well preserved. Its oldest part is the tower in the right foreground, which was built in 1302. The small octagonal tower on the left, called Queen Margaret’s Bower, is where the Queen awaited news of her husband James IV’s encounter with the English at Flodden, only to learn of his death. In front of the palace is the church of Saint Michael, generally called the cathedral. Consecrated sixty years before the foundation of the palace, it was destroyed by fire in 1424 and has been much rebuilt and restored since – the latest addition being Geoffrey Clarke’s spikey crown, put into place by helicopter in 1964. Before it, the High Street, old style and new, branches to the east and the west; and behind is the small loch, still popular with local sailors.

Linlithgow is a hidden gem that is worth a visit on your chauffeur driven tour of Scotland.