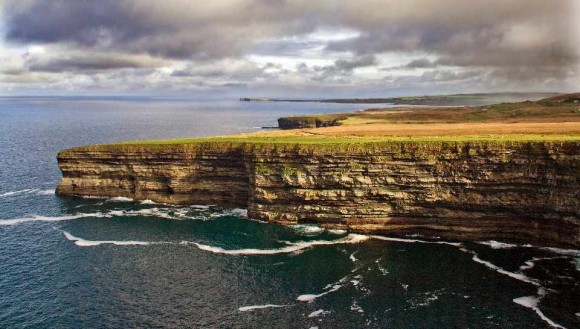 The earliest known human settlement of Ireland occurred in the Mesolithic 8000BC, when tribes from Europe crossed to Ireland by boat from Scotland, or possibly across a land-bridge from Britain or the Isle of Man, to the east coast of Ireland. Hunter-gatherer habitation sites and shell-middens have been found at Lough Boora, County Offaly (circa 7030BC), Mount Sandel, County Londonderry (circa 7010BC), and an increasing number of other sites which suggest a wide distribution of settlement. Most of the island was densely wooded, and it was not for a further four millennia that settled agriculture appears to have been practiced. At Lough Gur, County Limerick (circa 2740BC), rudimentary Neolithic dwellings have been excavated, and at Ceide Fields, County Mayo (circa 2270BC), an organised farm-landscape has been excavated beneath blanket bog. These enclosed fields are quite extensive, up to 7 hectares; most probably they were used for cattle grazing, rather than grain crops. The impressive modern-looking planning of this settlement suggests a settled agricultural society, working co-operatively for the benefit of the extended family-unit or tribal sub-group.

The most substantial Neolithic remains are funerary architecture which indicates a hierarchical society, capable of investing considerable resources in the erection of tombs and ritual-sites to honour their dead. Newgrange (circa 3100BC), one of the major tombs of the Boyne Valley Necropolis, is both the burial place of a priest-king, a habitation for the spirit of the tribe, and, when the rays of the rising sun penetrate its tomb-chamber during the mid-winter solstice, a monument to the spiritual beliefs, astronomical understanding, and engineering skills of the society. The geometric art which the monoliths of Newgrange are decorated, confirm the accomplishment of this aesthetically sophisticated people, aware of the power of abstract symbolism, and skilled in using graphic form to record significant information.

From circa 2000BC, further waves of emigrants arrived in Ireland, bringing metal-working technology with them. Abundant sources of copper and gold enabled the Bronze Age peoples to produce the weaponry and body ornaments for which the period is famous, and which led to developments in agriculture trade and warfare.

Prehistoric Ireland has given us some must see attractions, contact Ireland & Scotland Luxury Tours now to organise your Ireland tours.